Thanks to the 350.org Bay Area and System Change Not Climate Change organizers, volunteers, and attendeeds, and Rock The Bike crewmembers who came together for the People’s Climate Rally this past September 21 on the shores of Lake Merritt in Oakland. A major highlight of the event was Boots Riley’s spoken word and song during the peak of the event when at least 2500 people were in attendance. Skip ahead to 5:15 to hear the poem (warning, language!) Check out the awesome dance moves of the pedaler on the Tree during the song Ghetto Blaster (at 3:12). It’s inspiring to hear an activist talk about people power while using a people-powered PA system.

In this second video, Rock The Bike’s Fossil Fool induces an outage in order to reinforce the message of people power:

It was our largest audience size to date by more than double,  the previous being the 2013 San Francisco Bicycle Music Festival in Golden Gate Park at about 1000.

The crowd size meant lots of new information to take in about live sound.

While our 16-bike Pedal Power system functioned flawlessly, delivering a steady supply of power to our amplifiers (note the green Pedalometer in view under the speaker in the photo above), our audio system was at its limit.  We were simultaneously getting complaints from some people in the front row that the sound was too loud and requests from organizers for the sound to be heard in the kids zone on in the back corner. Interestingly the problem was only happening during speech, not during music. Music is a full-spectrum audio signal with bass, mid and treble. while speech is more concentrated on a specific frequency range. It was the peaks of the speeches that were hard on the ears of the front rows.

The way that traditional audio companies handle a situation like this is with taller line arrays in which more of the speakers are aimed at the back. But this uses lots of power. The other way to deal with it, and our plan for large events in the future, is to position repeater stations mid-way through the audience with a time-delayed audio signal so that the sound from the stage and the sound from the repeaters arrives at the same time to the ears of the people at the back. The cool thing about the repeater stations is that they could be powered by bikes right by the speakers. We would probably use our standard One Bike / One Speaker system for this. Then people in the middle of the crowd won’t have to walk all the way to the front to pitch in some Pedal Power! 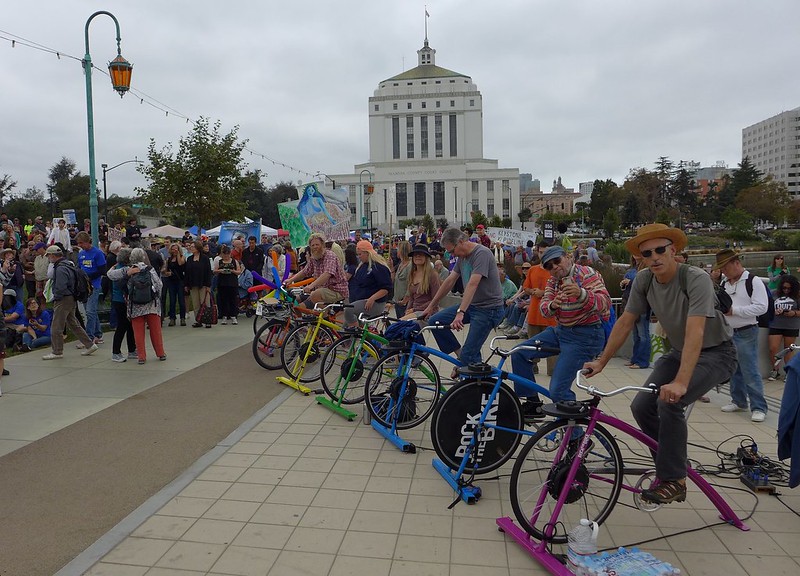 Speaking of Pedal Power, check out the beautiful color theory array of Generator Pros in our Biker Bar. 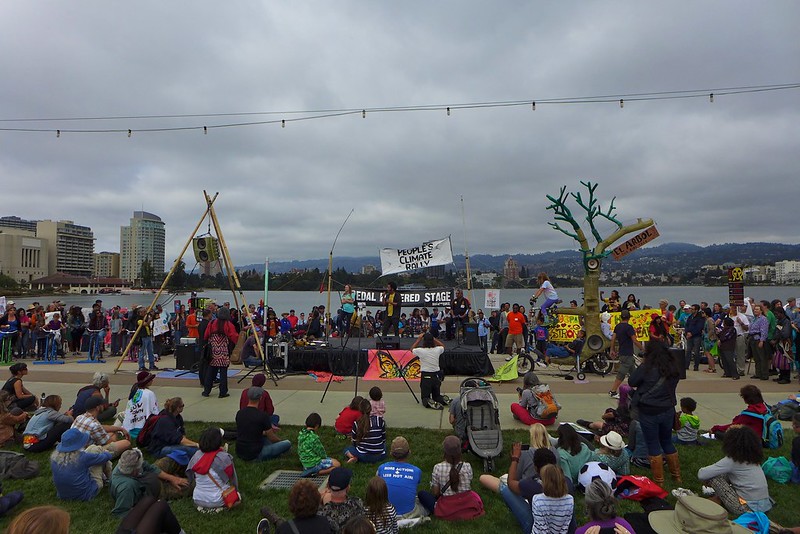 We were proud to set the stage with the taller elements of the bamboo tripods and El Arbol, the Bike Tree. The organizers had focused on organizing — inviting the many groups and coalitions of activists and environmentalists that made the day a success — and didn’t have a plan for the feng shui of the stage. No problem! Rock The Bike is happy to help create a sense of theatrical presence at our events. Look how the tall components frame Boots Riley during his spoken word performance. 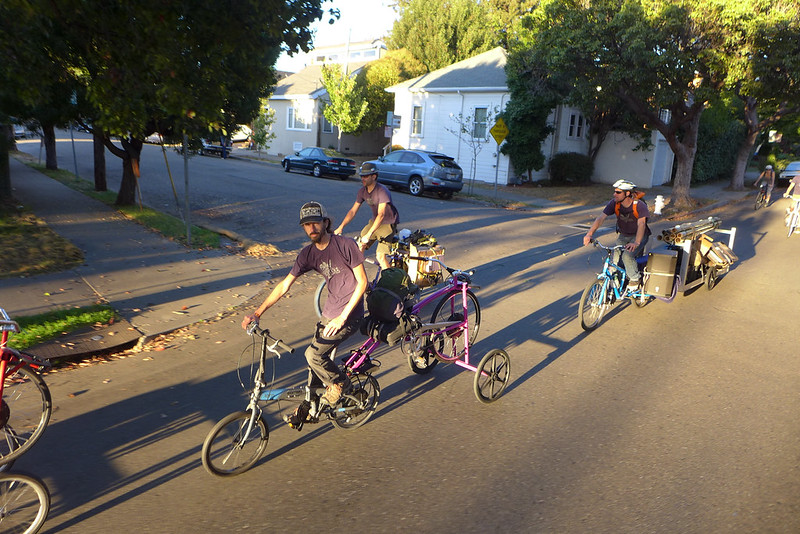 Another element that made the People’s Climate Rally a win for us was the volunteer roadies.

We requested that 350 Bay Area hook us up with 4 volunteer roadies who could help us transport our entire system to the event without cars and trucks. You can see some clips of the roadying in the second video above. We put our trailer wheels in our Generator Pros and installed them behind volunteers’ bikes. We rode with music into the setting sun. The ride was about 5 miles, and was pretty flat. The rides are a great bonding experience for volunteers and crew and we thanked riders with pizza back at our Oakland shop.