When a bike gets stolen, activate your networks to get lots of eyes looking for you. And then get that bike back.

After a recent Bicycle Music Festival volunteer meeting one of our best cargo bikes, a Mundo 500, was stolen. It was locked to itself. This electric cargo bike was heavy, immobilized and impossible to push. The thieves must have had to lift it into a truck. I realized it the next morning and felt dejected and ashamed.

I gathered some resolve to ask around for my bike. I remembered my friend Kipchoge’s story of recovering his stolen laptop by spending 3 days lurking in the underworld of San Francisco’s seediest Tenderloin and Mission neighborhoods. When he finally found himself face to face with the man who’d stolen it, in the hallway of a dingy hotel, the man admitted he hadn’t yet wiped the hard drive or sold it yet because he liked a video on the desktop. The video showed Kipchoge and his friends riding into the woods on Xtracycles carrying chainsaws, in order to do trail maintenance.

I printed out the photo below and headed out to talk to people in the nooks and crannies under highway overpasses and in the Plaza at Civic Center. 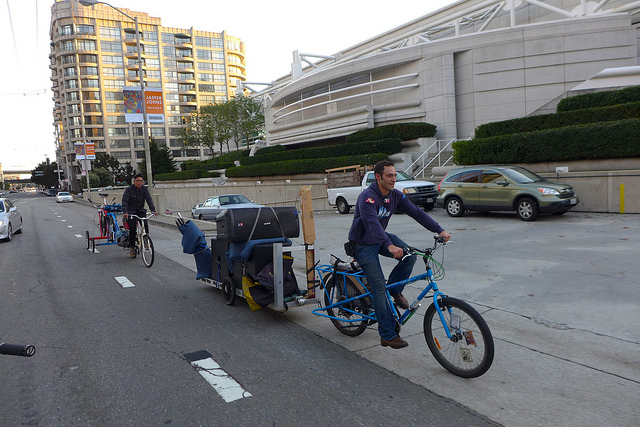 I also reached out to crewmembers and friends on facebook for help. I posted it everywhere, in all the group pages for which I was a member. RTB’s Nio connected me with Jenny Oh, who has built a bike theft recovery network that is remarkably effective at getting stolen bikes back to their owners. She reposted my photo and shared her tips for getting bikes back. Following the advice I filed an online Police Report.

I found that friends and even the people on the street were overwhelmingly sympathetic with my cause.  Alas, they weren’t giving me any leads. I didn’t feel threatened or awkward. I would just walk up to them and said “Hi, have you seen this bike? It just got stolen.” Some were actively trying to get money out of me but they were easy to spot. One guy said he knew where the bike was, but his timing didn’t check out; he said he’d seen it before it was actually stolen. They universally liked the bike and expressed real empathy. One guy said “I steal bikes, but I wouldn’t steal a bike like that. That’s a working bike.” The most embarrassing moment of my search was when I was asking a group of fairly strung out individuals in the TL for help. I told them the bike had an unusual bamboo fender. One of them said “You have a pretty unusual fender yourself!”, while pointing at my crotch. As he repeated himself, voice rising into laughing hysterics, I looked down and realized my fly was down. Exit stage left.

My initial fervor for hitting the streets was brief. I have a business to run and I pretty much gave up the creative quirky approach to getting the bike back after the first day. I filed a claim with our insurance provider and would have probably completed it by now if not for extensive documentation they required.

Fortunes turned when a crewmember (alum?) named Kai saw the bike locked to signpost in his neighborhood. A fan of cargo bikes, he regularly checks out Mundos he sees on the street. But this one caught his attention because of the custom welded rack and trailer hitch. He snapped a picture and sent it to his brother Leif, who showed to me, in the back seat of a pickup truck heading back from Los Angeles where we’d been for UCLA’s Ecochella. 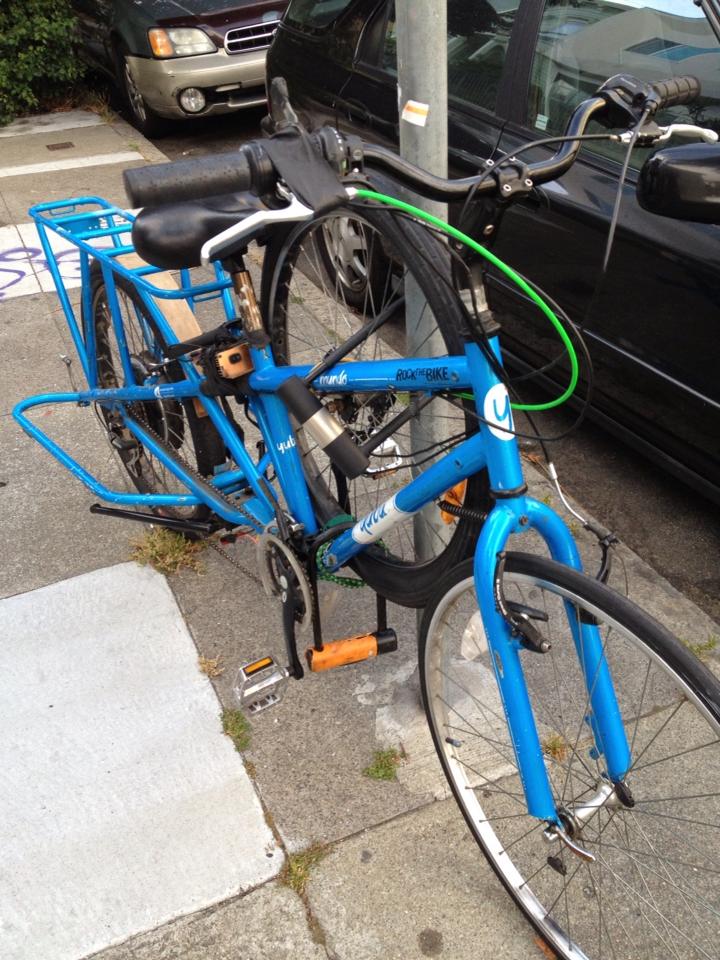 The photo was a positive match. There was my bright green cable housing, eBike controller, and Cane Creek brakes. There are way too many custom details on this bike to leave any doubt. On closer inspection, it appeared that my original U-Lock and wheel were still on the bike; the thief hadn’t bothered to cut off my lock!

As we continued driving in to the city, we wondered how to approach it. It would be after dark; did we really want to deal with an angry thief at this hour? I called the SFPD for backup. The dispatcher told us to meet them somewhere other than the bike in case the thief were to get upset. I chose a gas station since we were empty anyway. We refilled and waited.  And waited.

It was my dislike of gas stations and my love of my missing Mundo that got me to stop waiting and make for the bike. It was right where Kai said it would be, but we had no way to cut off the offending lock. So we threw another lock on it and for good measure, took the rear wheel. Then Leif got a call back from Laird that Cyclecide’s Big Daddy could lend us an angle grinder with a cutoff wheel. We picked it up and made a plan to return in the morning when the noise wouldn’t bother the neighbors as much.

The video at the top shows what happened next. We returned in the morning and used a Rock The Bike Pedal Power Utility Box to collect the energy from two different bike generators and supply Pure Sine wave AC power to the angle grinder. The Utility Box had no energy stored when we arrived. What you see in the video is a pure energy transfer between two determined friends’ legs and a powerful angle grinder.

The bike is in decent condition. I lost a saddle, a lithium ion battery for the eBike motor, and a Mundo bag. It wasn’t pristine when I lost it. I’m planning to put some work in to show gratitude for having it back.

Some folks on YouTube have commented that we shouldn’t have ‘stolen’ the bike back (or should have at least left a note) because perhaps the new ‘owner’ had bought it from someone else and would not be out looking for it. I find it hard to believe that the new ‘owner’ didn’t know it was stolen. They had been riding around with the front wheel bungied to the frame. In other words, they had it for 3 weeks but didn’t have the resourcefulness to cut my lock off.

The greatest advice I can offer others is to get your network working for you. Multiply the number of eyeballs who are pattern-matching your bike to the bikes they see on the street. Ask lots of people in lots of neighborhoods. Supply them good photos and keep a positive attitude. And pray for good luck!