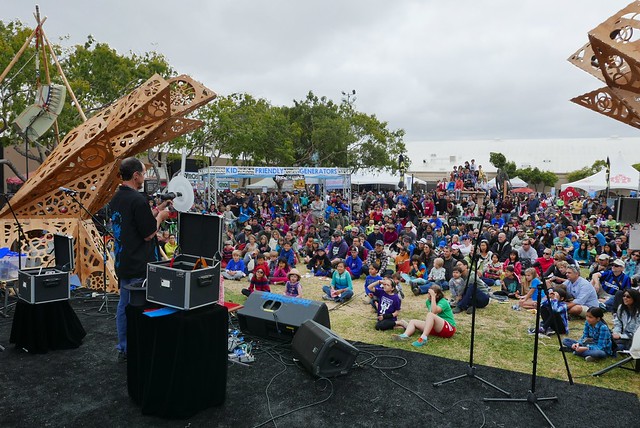 Maker Faire is very family oriented. The largest audience of the weekend was for Magician Bryan Patrick, whose sound needs were ironically minimal.

Since our earliest moments of Pedal Powered experimentation, I’ve been fascinated by how much sound comes from one pedaler’s efforts. I remember a 12-year-old powering my street performance at a charity bike event for an audience of 30-50 people in the early goings. He was into it! Not too hard, not too easy. Great sound out to about 20 feet from the speaker. The ratio of 1 pedaler for every 50-100 people at our events has roughly held as we’ve scaled up Rock The Bike’s full system to do larger events. At the Maker Faire in San Mateo this year, we brought an 18-bike system capable of entertaining over 1000 people, and at most times it was primarily powered by kids. The kids were not always able or interested in bringing our Pedalometer to the top of its range, but all things considered we had a breakthrough, so I wanted to bring you all up to date on it.

Some notable firsts from this year’s Maker Faire included (captions below photos): 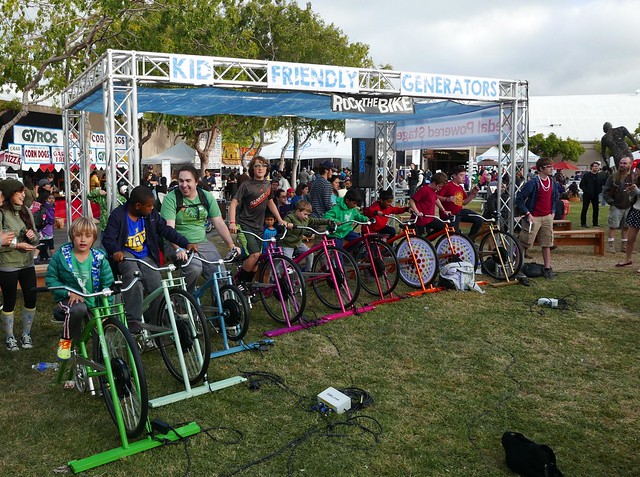 First ever Kiddo Biker Bar featuring the largest number of kid-friendly Generator Pros we’ve ever brought out: 14. (4 on opposite side of the stage).

First use of Russian Dolls Sound System (shown hanging from bamboo tripods) in conjunction with a center fill main. The Russian Dolls system is an elevated system which stands about 10 feet to the left and right of the stage. A center fill is used to get great sound to the front rows without blasting the main audience. 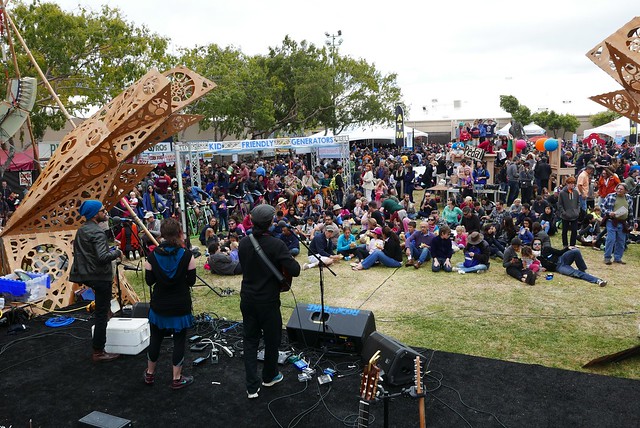 Our mixer has a L, R, and M (mono) outputs. The M output is typically unused, but this time we used it for the center fill speaker (shown above with blue Rock The Bike stencil). Big improvement in listening quality in the main audience area. 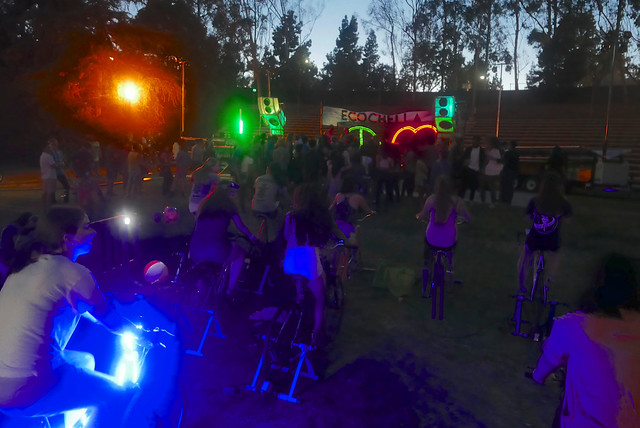 These same speakers are also ready for night time use with beautiful integrated smart LEDs capable of responding to changes in the music on stage. Shown above in use at UCLA’s Ecochella earlier this year.

– First time passing the 10000 barrier on our Energy ‘Flip-0-meter’. Sadly it malfunctioned by reseting to 1000 after the big ‘9999’ moment, but I kept track and found that for the weekend-long Faire, we pedaled over 15000 Watt-Hours of energy.

– First time crafting a lineup with 0 down time. We used ‘tweener’ performances to keep the audiences entertained while setting up for larger band performances.

Now that Rock The Bike is focusing on larger events, who’s available for small and medium events?

Meanwhile performers and musicians from our music community who have been training on our system since we began doing Pedal Powered shows in 2007 are now offering medium sized stages using their own gear or borrowing gear from Rock The Bike.

– SHAKE YOUR PEACE! (Gabe Dominguez). Gabe purchased gear from Rock The Bike and continues to do Pedal Powered, battery powered, and traditionally powered sound for rallies, events, and weddings. He recently brought a Pedal Powered Stage to an anti-GMO rally.

– Justin Ancheta. Bandleader and crewmember now has the know-how to coordinate a 8-bike Pedal Powered Stage. Justin has been the stage-manager, booker, and crew coordinator at recent Rock The Bike events including Maker Faire.

– Cello Joe. Joey owns a 1 Bike / 1 Speaker system from Rock The Bike and can coordinate larger systems by borrowing additional gear. He can hold down long sets of his own original music and brings in special guests.

– Thomas Spellman. Thomas has served as the engineer of the Pleasant Revolution and has a Pedal Powered system of his own that’s capable of medium sized audiences, with a focus on events near Nevada City / Grass Valley. He’s also involved with up and coming performers in the Transformational Festival scene including Polish Ambassador.