After NAU student Joanna Wheaton saw Rock the Bike’s bike-powered music and light show at UCLA’s Ecochella in 2014, she felt inspired by the potential of people-powered concerts. Joanna is a part of her campus’ student environmental caucus — the Green Jacks — who’s goals include creating a culture of sustainability on campus, encouraging student involvement, and reducing NAU’s environmental impact through student-organized events such as Better World Film Series, Earth Week and the event that our blog post is highlighting, Earth Jam 2019 on April 19. They are purchasing a 10-bike system from us that we are affectionately calling “party in a box” because it stores so compactly when not in use but creates a big sound for concerts. Students are able to demonstrate their resourcefulness by gathering bikes from their community, they just don’t have to take on the full responsibility of building their own system from scratch, something that is not easy to get right on your first try. 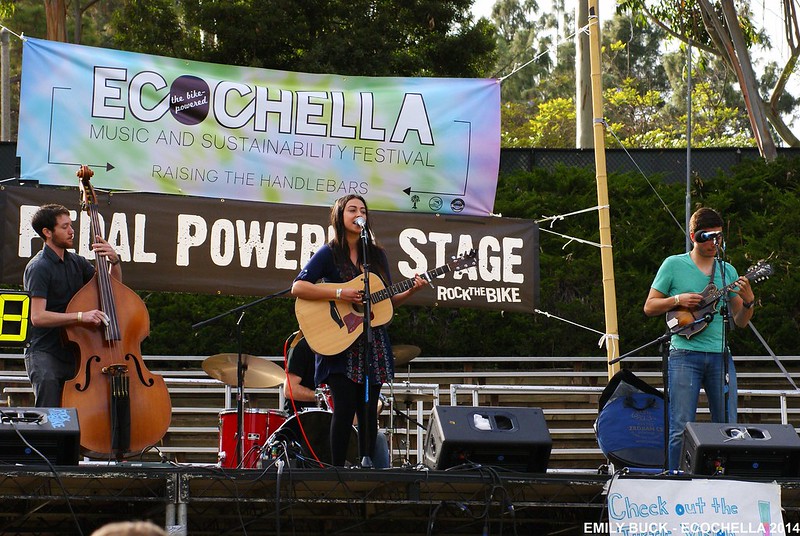 We wanted to find out more about what inspires and motivates students like Joanna so we asked if we could interview her! Rock the Bike founder Paul Freedman below interviews Joanna Wheaton about what lead her to be involved with environmentally minded event planning.

Paul: What year are you in school, please? If you were involved in the first UCLA Ecochella, then maybe you are a grad student?

Joanna: I am actually pursuing a post-bac right now! So I guess that makes me a 6th-year undergrad, though I’m still taking graduate level courses as well. At UCLA I majored in Political Science with minors in Environmental Systems & Society and Urban & Regional Planning; now I’m getting a BS in Mathematics with minors in Computer Science, Economics, and GIS.

Joanna: This is the first semester being involved with the Green Jacks. It might make more sense for me to answer this question in the context of E3 at UCLA since my involvement with E3 was much more robust (I was the co-chair my junior and senior year) and E3 was significantly more active at UCLA than the Green Jacks are at NAU.

The things that I learned in my UCLA freshman “clusters” about the global environment and the environmentally-engaged people that I met through it quickly motivated me to make environmental issues a key part of my academic and personal life.

I participated in  Education for Sustainable Living Program (ESLP) throughout my undergraduate experience and, during my senior year, I led the lecture series as well as an action research team. Between ESLP, E3 and other sustainability initiatives on campus, there are seemingly endless opportunities to learn more about the urgency of climate change and to get involved with the sustainability community at UCLA and in greater Los Angeles. It was really rewarding to be welcomed into the sustainability family at UCLA, which I would characterize as being extremely collaborative and supportive. It was also very empowering to see our efforts result in tangible changes to campus policies and programming.

As I learned more about climate change, I became more motivated to play a role in sustainability efforts, and there was certainly no shortage of opportunities for involvement at UCLA and in Los Angeles! In retrospect, we were also very fortunate to have top-down support for sustainability initiatives at pretty much every level. Although students at NAU as well as the City of Flagstaff and the greater Flagstaff community tend to really value sustainability, students do not have as many opportunities to shape campus policy. Whereas at UCLA student groups and university stakeholders worked together to draft and implement sustainability action plans, NAU administrators seem unmotivated to implement NAU’s Climate Action Plan and have cut back funding and resources for the Office of Sustainability to the extent that the Office’s manager recently resigned in frustration.

Paul: What do you consider the biggest opportunities for a group like Green Jacks to create a culture of sustainability within NAU? Where are the biggest chances of improvement that you see on campus?

Joanna: I would say that there is a pretty vibrant culture of sustainability at NAU. It is most apparent in the University’s academic offerings (there is even a PhD in Sustainability), the research emphases of faculty, and the interests of students. However, as I mentioned earlier, this enthusiasm is not reflected by the priorities of the administration, which has placed a greater emphasis on other goals like expanding NAU Athletics. As a result, there are fewer opportunities to effectively shape campus policy and there is lower turnout at student-run sustainability events than one might expect. I view those two outcomes as being related in that it feels more rewarding and worth-while to be involved in sustainability programming when students feel like their efforts have the potential to result in tangible changes to campus policy. Despite these institutional limitations, I would identify student-run events as the area in which there is the greatest potential for further fostering a culture of sustainability at NAU.

Like all campuses, sustainability events at NAU can be kind of insular in that they are primarily attended by a group of students who are already committed to sustainability. Ideally, on-campus programming would have enough variety and be sufficiently entertaining to attract a wider range of students, some of whom have not already dedicated their lives to environmental efforts. For example, hosting an event to pick up litter is going to appeal to a relatively narrow group of students who don’t need to be convinced about the merits of sustainability. By contrast, a more diverse group of students would be interested in enjoying free food at a Green Chef cooking competition where a panel of sustainability-oriented chefs judge meals that are prepared on-the-spot with random farmers market produce by teams of students competing for a gift card to bougie local restaurants.

Paul: Having been to Ecochella, can you speak to the impacts that it has had at UCLA or on you?

Joanna: Of all the events that I’ve hosted or in which I’ve participated, bike-powered music festivals are by far the most effective at bringing new faces to sustainability events. This is partially a function of the fact that they are inherently fun but is also because it is advantageous to organize groups of cyclists in advance in order to ensure a steady supply of power. This provides a great opportunity to reach out to groups that may not otherwise be aware of or interested in sustainability events, such as athletic organizations, career-related organizations, sororities and fraternities, student clubs, etc. Using bike-power also makes energy use and generation more tangible, which may encourage students to consider their energy use from a different perspective.

Before organizing Ecochella, creating an event that harnessed bike power had never occurred to me. But the event generated such excitement from the moment it was introduced (in terms of students wanting to help with the organization as well as wanting to participate by pedaling or performing) that its potential to appeal to a diverse range of students was immediately apparent. Ecochella was easily a major highlight of my undergrad experience at UCLA, and I know the same was true for many of my peers, regardless of whether they were part of UCLA’s “sustainability bubble.”

Joanna, in addition to her full class load, has organized a way for NAU to become the first to produce Pedal Powered shows in AZ and wrote an inspiring and astute grant proposal for her school to own its very own bike power sound system.

Here are some excerpts from Joanna’s proposal to her Environmental student caucus funding team explaining her motivations and visions for NAU’s purchase of a Rock the Bike sound system,

“The goal of our project is to obtain a “fleet” of bicycle power generators to use at Green Jacks’ Earth Jam in April 2019, as well as at relevant future events. With 10 bicycle generator stands, a pedal power utility box, and a pedalometer, it will be possible to generate enough energy to power the musical performances at annual Earth Jam events. With this basic setup, it will be possible to power a variety of existing student events with bicycles, such as Earth Jam and the Better World Film Series. It will also be possible to utilize the bike generators as stand-alone features powering, for example, blenders, device chargers, ice cream makers, a single PA speaker, and any number of other small electrical appliances. Incorporating bike-power into educational and outreach efforts in this way would provide a fun, interactive, healthy, and emissions-free way for the community to engage with sustainability.”

Her vision includes promoting awareness of energy use on campus, supporting a culture of sustainability and promoting bicycling as transportation. Another focus of this project is the community collaboration it encourages. Joanna demonstrates that the bike-powered concert event and the future events that it can be utilized for will inspire student involvement across categories. “The baseline need for energy generation also presents natural opportunities for reaching out to student groups whose members are not necessarily interested in sustainability… when the leader of this project helped to found 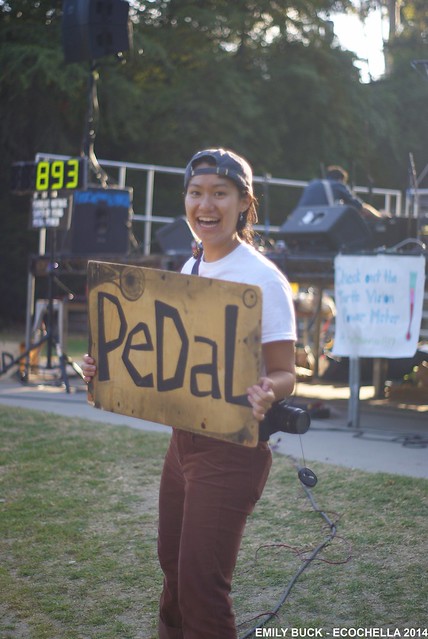 UCLA’s annual bike-powered music festival, she recruited the university’s cycling and triathlon teams to participate, as well as other student groups that are generally enthusiastic about competing against one another, such as fraternities, sororities, club sports teams, and residential halls. Bicycle-powered events that incorporate music and other forms of entertainment provide an opportunity to engage with students and community members who would otherwise be unlikely to attend sustainability-related events.”

Joanna commented on how the compatibility and relatively compact size of the parts of this bike-powered system made it a very beneficial choice, reducing storage space requirements. “All of the equipment would fit in a small closet space, and Chandler McCormick has generously offered to store them in the GreeNAU Office in Facility Services,” she highlights.

We love seeing super inspired organizers like Joanna who end up creating fun events and bringing people together to make the greatest possible impact. Her efforts to secure funding for NAU to own its own bike-powered sound system will live on past this year’s Earth Day events and will be used in future Green Jack’s events as well as for several bike related or science events in Flagstaff. She even comments that she may use this system in the future to produce off-the-grid Music Festivals in Flagstaff much like the Bay Area based Bicycle Music Festival produced for many years by the founder of Rock the Bike. Super cool!! Look for special coverage of their event this spring! We hope to be able to feature a live feed video of their performances! 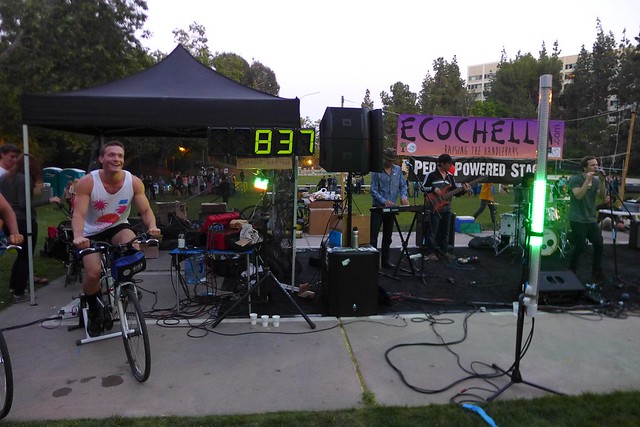 Photos from Ecochella at UCLA