KS: What made you want to join the tour?

PF: I’ve been taking myself on increasingly long summer bike tours for years and have always found it to be a high point of the summer. I knew I wanted to join for week or more when I heard about it. Just to be on bike tour was my main motivation. I also wanted to back up their purchase of our pedal powered gear.

KS: How long did you ride, days/miles? From where to where?

PF: I joined the crew on Salt Spring Island in British Columbia—they were already on tour. I met them at the Farmers Market when they were setting up for a Biketopia Music Festival. I stayed with them for two weeks, until Seattle, and then joined them again on the Sonoma coast of California for another stint. I think our biggest day of riding was 50-55 miles approaching Seattle. I felt it on the train ride home, I could barely walk!I always like combining public transportation with bike touring. To meet up with them the first time, I took Amtrak to Seattle, a ferry to Victoria, B.C. and then biked from there to the Salt Spring ferry. The second time I was able to take a bus from San Francisco to the coast to meet up with them.

KS: You’ve toured with the Pleasant Revolution before, in 2010 in Spain. Except for Heather Normandale, one of the artists, this was a completely different crew this year. How did this one compare to the Pleasant Revolution that the Ginger Ninjas led?
PF: Two of the main differences were the consensus decision making process and the stated goal of it being a women led tour.  (Although that seemed a little contradictory—being consensus on the one hand but “women led” on the other). In Spain I had seen you leading the tour and everyone else playing their supporting roles.

The level of difficulty seemed lower this time to me on the parts I was on. But that’s not a fair comparison because when I joined in Spain you were in the heart of the Pyrenees and had been riding for months.

There were a lot of first time riders, folks who’d never been on a bike tour before, who began as musicians much more than bike riders. A really strong value was that the tour be a group uplifting process. It was more nurturing and focused on empowerment of every rider. 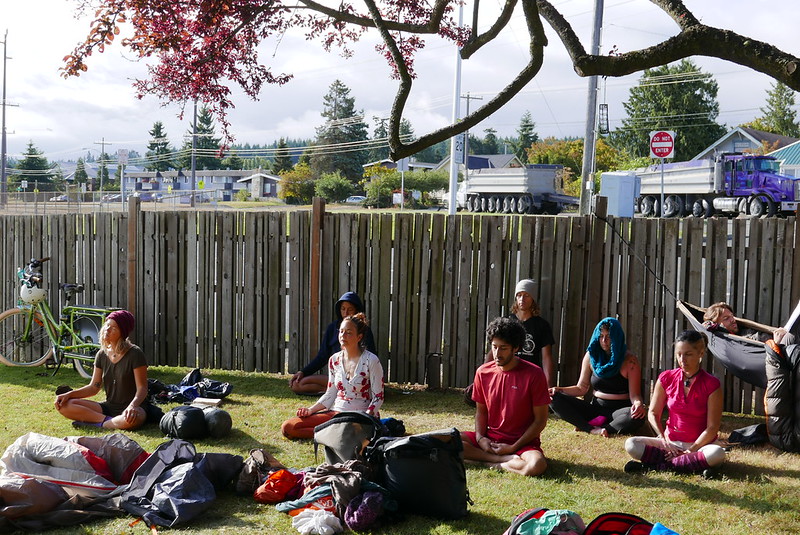 I felt that in the participation at the shows, where there was a strong value that everyone should have a voice and a purpose. Like, for instance, there was a dedicated MC (Nate) and there were circus elements and clowning for non-musicians (Nicky and Mega).
When I joined in Europe there were some particular days when I felt like it was a really athletic endeavor. Like the day we went probably 60 miles, mostly on dirt, through twelve pitch black old railroad tunnels and over a small mountain and I had lots of flats, too. That time I had a fully loaded cargo bike with sound equipment and group gear, and this time I had a pretty easy experience with a titanium road bike and very little group gear, since I knew the the tour had the load carrying bases covered without my help.
Playing shows in North America was really different than Europe. More organizing and pre-planning was needed here, whereas we did more impromptu gigs in Europe where we’d just show up in a city square, set up and play. I think that was both because of the personalities on this tour and the laws. This crew didn’t want to get hassled or forced to stop playing and they did the pre-work to get permission and make sure it didn’t happen.
KS: Favorite day of riding?
PF: I had a couple. The favorite moment was moving towards Port Townsend, Washington in the evening, on the 20. 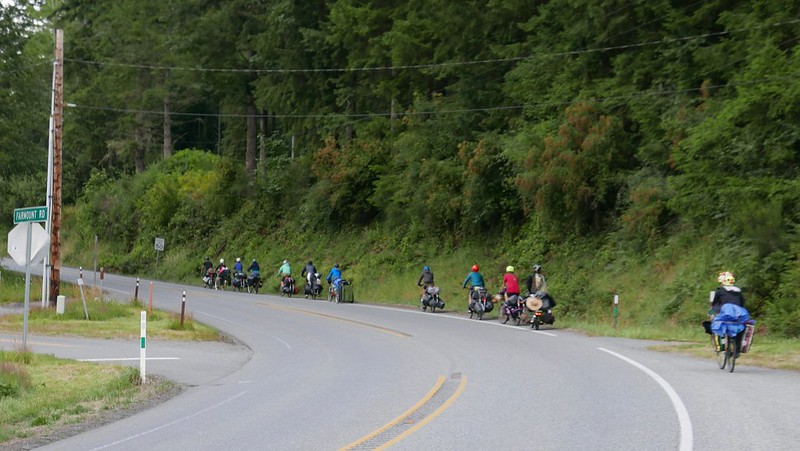 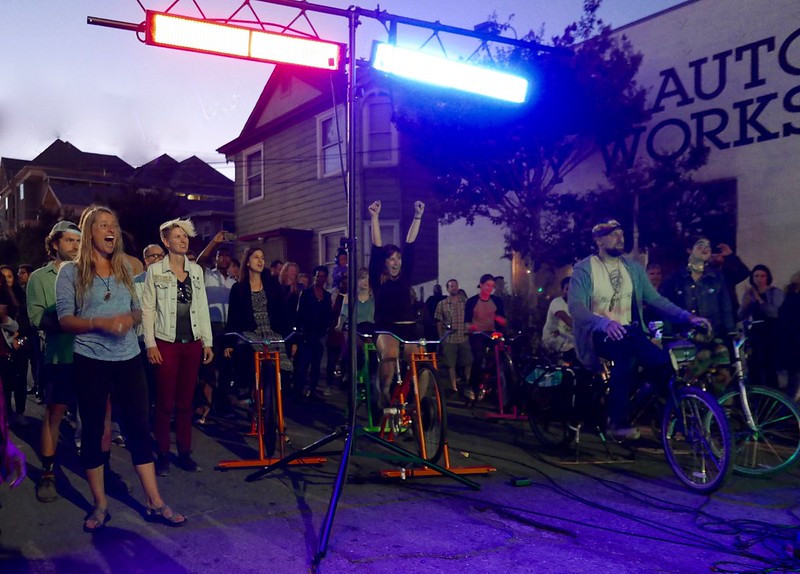 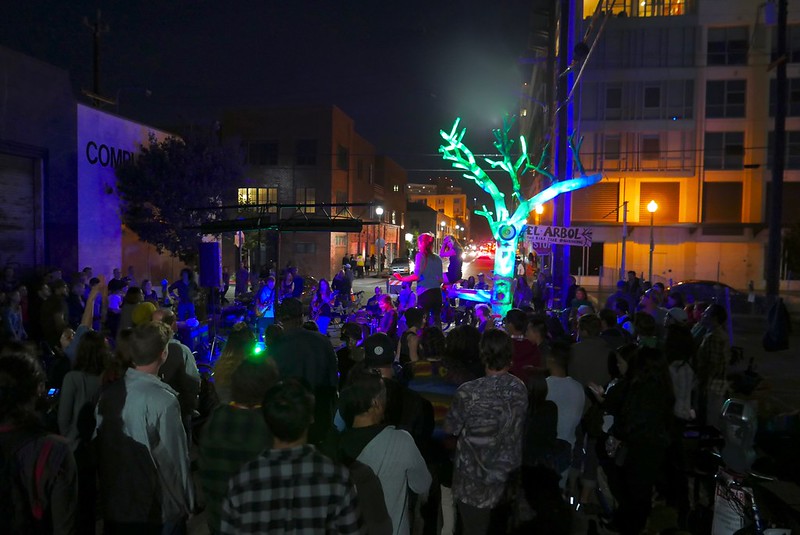 I brought out El Arbol to help draw people to the homecoming show. Note Molly on stilts!

We also took the opportunity to bring a new level of engineering into their Pedal Power Utility Box, and achieved what I think is the holy grail by combining the efficiency of the DC-modified JBL loudspeakers with the simplicity of having everyone pedaling into the same energy bank. In the past we’ve had to have separate groups of riders for separate power inputs and that can be challenging to manage. The upgrade required a pretty fancy circuit called that we call the Decida, because it “decides” where to send any given electron coming its way from a pedaler based on which of the circuits (positive rail of DC, negative rail of DC, or AC) needs the energy at that moment. 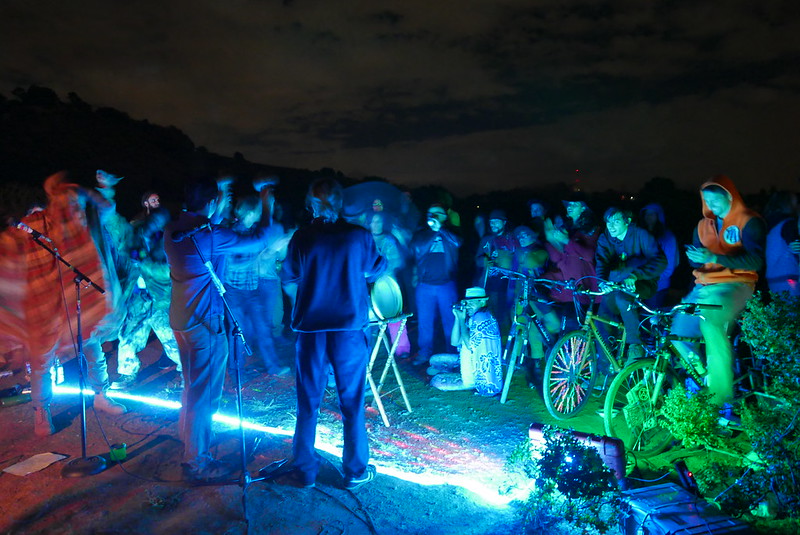 Secret hilltop sendoff party. The Utility Box is next to the first bike’s wheel. The lid (open) has a Pedalometer inside that shows people how hard to pedal.

The system was completely stable for 30 shows, the entire tour, and achieved the efficiency we were hoping for. Four people could supply all the power for a subwoofer, all the AC needs of the instruments and two 15″ speakers. 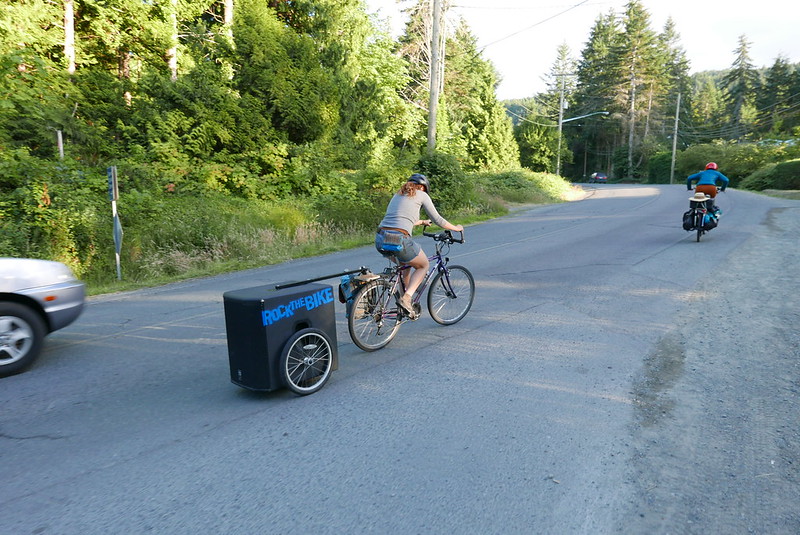 Dara towing the subwoofer, which took on the name Subrina.

It’s the first time that any band has bicycled with a subwoofer, something Adley was proud of, and it really brought the sound to a higher level than any tour to date. The fact that it still only took four bikes to power it and that it never broke down is a true milestone that would amaze anyone who’s ever been on Pleasant Revolution tour before.

KS: Why did you support the tour?

PF: I thought their motivation was pure — bringing pedal power to the people. Also Rock The Bike isn’t biking to nearly as many of our shows right now and I want to really support that as it also speaks to our roots and core principles. Also, my friends were doing it: Adley, Heather, and Carolyn, and I just wanted to support them!

KS: Does it benefit Rock the Bike?

PF: Hard to say, in terms of $ or exposure to people in the towns that we passed through. No one has said, Hey I saw you guys in Ashland and want some Pedal Power for my daughter’s school, but in terms of building and supporting the community of bike-powered artists and musicians it’s more tangible. It’s good for Rock the Bike’s name to say we’re supporting the Pleasant Revolution as it continues to evolve. To some degree I did it in faith that together somehow all of us are going to bring Pedal Power to a new place and look back on it with pride. I hope that through tours and awesome outreach and RTB’s innovation and willingness to have larger set of gear we’re going to break out and have a wider audience. Being part of the various efforts is a way of continuing that possibility.
KS: Any other inspirations? Songs? Life? Inventions?
PF: I felt inspired to create a new brand or a expand Rock the Bike to become a bike touring trainer and outfitter for people who don’t have all the gear or know-how. Like, we’d offer low carbon vacation packs with curated route maps, a lightweight tent, down sleeping bag, front packs, waterproof panniers, touring bike, etc.
I came up with a little snippet of a rap, about having a good system for where you put your stuff:
Put it where it goes,
You could lose your mind later.
Put it where it goes,
You could waste your time later.
You could make your friends mad.
Dropping what they’re doing cuz they’re trying to help you look
For that thing that’s already in your bag,
Put it where it goes!
KS: People who know you know that much of the inspiration for what Rock the Bike makes and sells has come from your personal passion for bike power, bike travel, bike community, and performing. Most of the early music-related Rock the Bike products had their origins in your and your friends’ street shows.
What’s your relationship to performing like these days?
PF: I’m definitely taking a break and not seeking the mic right now, and enjoying other forms of creativity. Technically, I’m in a migration between my Cardboard Box beat machine and the laptop and I haven’t made the full transition yet. I enjoyed performing a couple times on tour as a guest. It’s a good feeling to have memorized rhymes, to share them with the bike community and carry a messages with humor and funk.
KS: Anything else you’d like to add?
PF: The visit to the Yuba Bikes HQ in Petaluma was really sweet. It felt the way that I’d hope, wanting to link this new generation of mostly younger riders with the bike culture business community. We had a circle with the Yuba team for product feedback and mutual appreciation that made for a really sweet day. I’d like to continue doing that kind of diplomacy and advocacy.