Occasionally we attempt a really big smoothie operation, in which we show up with hundreds of pounds of fruit, ice, juices, etc., and get lots of people bike blending.

If this is what you’re going for too, here are the factors you’ll need to consider:

– Time (prep, setup, and the event itself)
– Ingredients
– # of Bike Blenders and enough space to position them
– # of pitchers
– Other kitchen gear: tent, tables, washing system, banners, waste system.
– size of your crew
– will you be sampling (giving away the rest of the pitcher)? Or will each person blend their own smoothie?

Last Wednesday we did a big gig at the Cal Campus in Berkeley. The client / partner was Under Armour and their event firm Engine Shop. The goal was 1000 smoothies in 6 hours with 10 Fender Blender Pros. We nearly hit the goal. We got a lot of things right and learned a lot too, and here’s a report of all that.

Set up time.
We showed up with a fully packed van at 8:30AM for an 11 O’Clock start time. Unloading with 4 people took 30 minutes, including positioning the bikes. By 9AM we were up to 5 people. With this size group we were able to set up the entire smoothie booth operation in 2 hours with time for coffee! 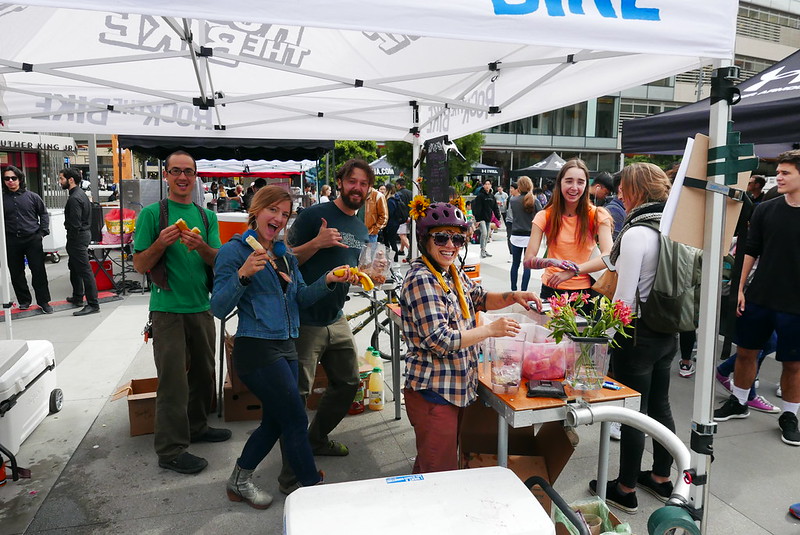 I planned on having a crew of 5 at the peak, but this wasn’t enough. We really needed a crew of 7. The event provided us 1 coach and our crewmember Caleb came on as a floater midday, to bring some things we forgot from the shop, and to help with the lunchtime rush. He stayed till the end. We had an experienced crew. Only their staffer was a newbie.

Here were the roles we had at the peak:
-1 dishwasher
-1 food prep / deal with waste / kitchen floater
-2 smoothie pitcher prep chefs (1 per flavor)
– 3 coaches

With this size crew we were able to move people through the line at a comfortable pace. The line did get to be about 10 people long at times. The biggest bottleneck seemed to be prepping the smoothie pitchers themselves, and then process of going from the tent to the bikes. Our partner wanted each person to pedal their own smoothie. That was a great goal because it upped the activity and the fun. It did slow down the total number of smoothies we were able to pour, however!

A big sign would have helped us show people what we wanted them to do. We used our voices and told students to: download the Under Armour fitness app, sign the waiver, choose their flavor, get their pitcher, bring their pitcher to a bike. Then our coaches helped put it on the blender base with the bungee hook, then the students blended, we helped them pour, they drank their smoothie, then they or a coach brought the dirty pitchers to the wash area. This happened about 750 times in 6 hours!

There weren’t any small kids so seat height wasn’t a big issue. Everyone was between 1 foot of each other so a lot of the seats ended up at a medium height. We still recommend changing the height for every rider but the consistent age group made this less necessary.

Kitchen:
To achieve a sanitary kitchen and pass inspection, We followed our own video tips that we posted on YouTube in 2014. Here they are:

Shopping:
Shopping took 2 people 4 hours the day before. We brought 3 big white coolers and put the frozen ingredients in the coolers and packed ice around them. The frozen blueberries were not very frozen at the start of the next day (and it wasn’t even a hot day). Same for the mango cubes; they were softening too. We needed a better way of ensuring frozen food stays frozen. Shopping the day before is borderline. Transferring to a chest freezer would be a big step forward. Taking the frozen blues and raspberries out of the cardboard boxes so that their inner plastic bags were up against ice would have helped a lot. The ice stayed cold enough to use!

Recipes:
Here are the 2 recipes we used:
Berry Blast:
– Frozen blueberries, raspberries, mango, then as we started running out of things… watermelon, and finally ACAI
– Banana
– Apple Juice, Lemonade, Almond Milk.
– Handful of organic kale / spinach / power greens
– Squeeze of lime when we had extra time.

We did something on this recipe that I’ve been wanting to do for a while, which is mix all the smoothie liquids in one big liquid dispenser to reduce the number of steps of prepping a smoothie. We used a Gatorade 5 gallon cooler. It worked really well. You can count seconds as you pour to get a consistent amount of liquid in each pitcher.

This recipe was a hit, however we found out Acai isn’t worth the extra money unless your audience knows what it is. The students didn’t know what it was, so they didn’t find it appealing. It doesn’t look very appetizing compared to berries. It tastes good but it doesn’t make smoothies fly off the shelves. Stick with berries that look like berries!

This was a very cost effective recipe. No frozen anything. We used only one 2 pound bag of organic cacao (only $11 ) We also used expensive Vega protein powder but again, you don’t need a lot per smoothie.

This flavor was a hit with the students and tasted rich and good, but with the almond butter and cacao powder it took longer to clean. I would like to experiment so we can serve a chocolatey rich shake that’s easier to clean.

Notes on Big Box stores and what they’re good for:

We shopped at Restaurant Depot in Oakland and CostCo in San Leandro.

Restaurant Depot did not have a lot of organic frozen options. We got non organic blues and raspberries and organic Acai. The frozen fruit section was nearly cleaned out when we arrived. This place was good for non organic bananas. We bought 120 lbs of bananas for $51 (3 cases, $17 each. That’s $0.42 per pound for bananas and they were the perfect degree of yellow. Way better than Trader Joes and other grocery stores). FYI: There are about 100-110 bananas in a case.

We also bought 3 watermelons for $21 that were perfectly ripe and pretty sweet.

Next we went to Costco.

Costco is good for:

Lastly we bought Mint at Whole Foods $2/bunch for small bunches. Later, $1.50 at Berkeley Bowl for same. We bought a total of 13 small bunches mint, and we ran out. We needed more like 20 bunches.

We spent around $600 on ingredients total. We made 840 smoothies and we would have barely had enough ingredients to make 1000 9 oz smoothies. We had about 10% unused ingredients. So we spent about $.71 / smoothie in food cost. I would have liked to spend more money on ingredients for more quantity and more organic. Having said this, $0.71/smoothie is pretty cost effective and I would keep this basic formula if we are ever trying to go huge again.

I would estimate that 750 people pedaled and from that we poured 840 9 oz servings. The best way to know how many smoothies you served at an event is to start with a known amount of cups and then count how many cups are left over. The client wanted each person to pedal their own smoothie. This slowed down the process and made it so that we didn’t run out of ingredients. If 1 person had blended enough for 4-6 servings or even for 2 servings, then we could have served way more people.

I’m a bit surprised that our crew of 5-7 people working hard for 6 hours with 10 bikes and having a huge amount of ingredients wasn’t enough to serve 1000 smoothies even with the requirement that each person blend their own smoothie. I think the process of making students download the app and sign the waver slowed things down and reduced the total number of takers.

Getting water seemed to take a long time. We didn’t plan it well. I didn’t ask the partner about this ahead of time. On the day of Tone asked a friendly restaurant and they said yes. We also didn’t have a good cart for getting water back and forth. The dish water tubs aren’t sturdy enough to stack and don’t have tight sealing lids. Using a Gatorade jug might have helped, with its tight sealing lid. Dumping dirty water was an issue. I don’t know where we did it.

Gear:
– We showed up with 21 pitchers and this was enough.
– The bikes worked very well overall but 4 of them had torque slip issues and needed more air and roller pressure.
– The new Bike-A-Smoothie banner was beautiful and added a lot of cheer to our booth. 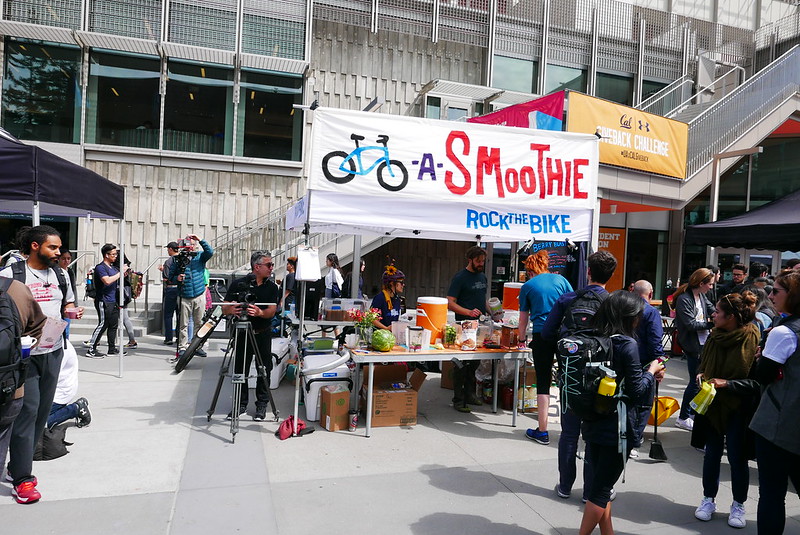 Transport: One of our crewmembers has a large Sprinter Van with a cargo space of about 5.5 ‘  x 14’. We rented it for the same as we would have spent on UHaul, around $200. It was big enough for everything, including the ingredients, tables, etc, but it was crowded on the way there because we had packed wrong. We had planned to use an additional trailer, but the van seemed big enough so we ditched the trailer because trailers take more time. If we had known we weren’t going to use the trailer, we would have packed the van smarter and there would have been clearly enough room.